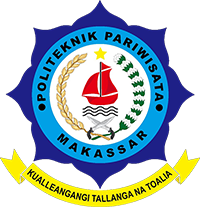 The Tourism Education and Training Center (BPLP) which was inaugurated on 18 September 1991 is the forerunner of the current Makassar Poltekpar. Ujung Pandang BPLP is an initiative of Mr. Ir. Yonathan L. Parapak who was then the Secretary General of Deparpostel and Prof. Dr. Ahmad Amiruddin as Governor of South Sulawesi. The establishment of BPLP in Ujung Pandang was intended to address the shortage of professional staff in the tourism sector.

Initially (BPLP) Ujung Pandang was established, with a certificate program. It was only a year later to open an educational program with a Diploma 2 level for the Front Office, Housekeeping, Food and Catering study programs.
After graduating the first diploma 2 alumni in 1994, BPLP opened the Tourism Travel Business diploma program and advanced Diploma 3 (D3) (1 year) from the Diploma 2 (D2) program, hospitality. In addition, BPLP also conducts tourism business training and tourism management for Civil Servants (PNS) in Eastern Indonesia.

In 1997 the college changed its name to the Makassar Tourism Academy (Akpar) according to the ministerial decree KM.27 / OT.001 / MPPT97. At that time there was also cooperation with (Japan International Cooperation Agency (JICA) and the ALLIANCE Francaise in terms of teaching assistance and learning facilities. Furthermore, Akpar Makassar collaborated with AUSAID through the assistance of teaching staff and the MARA Institute (Malaysia) in sending lecturers.

As a previous collaboration development, Makassar Tourism Academy was appointed by AUSAID as the Makassar Tourism Training Project with a Pilot Project for four years. The implementation of this collaboration is competency-based training and testing in the field of tourism and at the same time sending 12 lecturers to study at the Canberra Institute of Technology - Australia

A year later, the Makassar State Polytechnic of Tourism occupied a new campus on Jl. Mount Rinjani in the Kota Mandiri Tanjung Bunga area. Previously, the Akpar Makassar campus was located on Jl. Cenderawasih. The new campus stands on an area of ​​approximately 16 hectares and is equipped with a series of teaching and learning facilities, laboratory facilities with international standards.

How Many Departments and Study Programs in Poltekpar Makassar ?

What is the New Student Registration Process?

To start the registration process, start by filling out several forms in the student affairs menu and selecting the new student registration menu

How about the Alumni of Poltekpar?

Some of our Alumni are spread all over the world, both working with our joint venture companies, and are absorbed according to their respective fields of expertise

When is the Admission of New Students ?